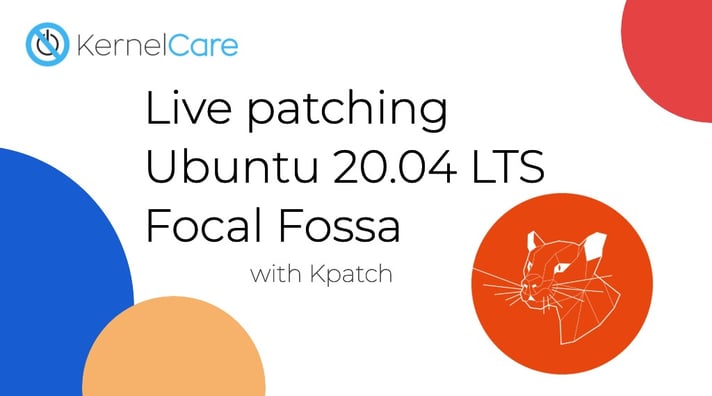 Aside from improved service continuity and uptime, organizations with large server fleets also use live patching to avoid the administrative overhead associated with the coordination and planning needed to reboot multiple systems.

This tutorial will show how to use Kpatch to change the behavior of a running Ubuntu 20.04 LTS Focal Fossa kernel without stopping it, changing the contents of /proc/uptime (and the uptime command) so that the system’s reported uptime is 10 years greater.

Kpatch was created by Red Hat and works on RHEL and its derivatives. Red Hat offer a commercial live patch service for RHEL customers, as do the following companies, who each focus on different distributions:

We have chosen Kpatch for this tutorial because it is one of the few solutions whose source code is freely available and regularly updated. We have another tutorial on Live patching Debian 10 Linux kernel with Kpatch - check it out too.

Here are the system prerequisites for following this tutorial.

Focal Fossa's kpatch package is out of date, so you must install it from source.

3. Get a copy of the Linux kernel source code

A patch source file is the output from the diff command run on the original and the changed source code files.

The patching example shown in the ‘Quick start’ section of the kpatch github page changes the output of /proc/meminfo. Many other Kpatch articles reproduce this example, so I wanted something different and a little more interesting, yet still safe.

This example changes the output of the uptime command to give them illusion that your server’s uptime has increased by a decade.

Live patching the Linux kernel with Kpatch isn’t hard. The difficult lies in writing a patch that won’t crash the system and will work with other patches that come later. Most patches are created from more than a simple diff and need thorough testing across multiple kernel versions running on various distributions.

Patch writers need to be both accomplished C programmers and experienced Linux kernel developers, and compiling the kernel and testing patches for every kernel version takes a big investment in hardware and automation tools. The rarity of skills and the cost of infrastructure means that vendors must charge for live patching services.

And don't forget to read our explicit guide on How to Apply Linux Kernel Security Patches: 3 Different Ways. The article explains how to update Linux kernels without rebooting, covering three different methods for some of the most popular Linux kernels.