The dreaded false positive exhaustion experienced by analysts brings with it numerous issues. Analysts begin ignoring reports, reviewing a false positive takes time and money, and incident response and threat hunting are affected. Scanning vendors continuously improve their procedures to better prevent false positives, but they still continue to have an impact on IT operations. The impact of false positives can be severe when benign reports create exhaustive overhead for your analysts. Worse yet, explaining to auditors why some items were marked can be tricky.

The Effects of False Positives on the Organization

The initial step in patch management is scanning servers and devices for information about their currently installed operating system and software versions. Ideally, the scanner has the proper permissions that tell banners to return the information needed to complete the scan, but misconfigurations can lead to incomplete or incorrectly returned data.

Scanners use a database of Common Vulnerabilities and Exposures (CVEs) and compare results to the reported versions on a server. If an outdated version is found, then the server is flagged for patching and marked as vulnerable. For a large organization, this automated system significantly improves the cybersecurity posture of the enterprise, reduces overhead on administrators, and keeps the company compliant with regulatory standards.

Issues arise when the scanner can’t poll the operating system fully. If scanners do not return accurate information or the operating system itself isn’t returned to the scanner, it reports the server as potentially vulnerable. This creates a false positive and requires administrator intervention. For an enterprise with hundreds of servers reporting false positives, the issue causes alert fatigue, which is a common phenomenon in analysts positions when vulnerability scanners inefficiently deal with false positives.

Why Do False Positives Appear in Linux Kernel Scanning?

The most common reason for false positives is authentication or authorization issues. Giving a vulnerability scanner open access to the network with full privileges also has its own issues. Unauthenticated scans are also an option, but this increases the network attack surface by allowing anyone access to verbose server information. Unauthenticated scans provide attackers with enough information to exploit server software with known vulnerabilities.

Scanners perform banner grabbing to get current software versions. System banners contain the software name and version, and scanners need access to this information to report accurate data. This information can be critical and disclose server vulnerabilities, so it’s often protected with authentication rules. However, if scanners don’t have access, a banner could return vague or incorrect information. For instance, a banner could return “Unknown Linux” to a scanner and trigger a false positive as the scanner is unable to determine if the operating system is fully patched.

Scanners need authenticated access but authentication could cause issues, so what should administrators do? Here are some best practices to avoid false positives:

How Does KernelCare Enterprise Address the False-Positive Issue for Linux Kernel CVE Scanning?

While patching the security vulnerabilities, KernelCare doesn't change the kernel version. The end result is that the currently running kernel will be fully patched, in memory, from the security perspective, yet /proc/version will continue to show the vulnerable version of the kernel.

To help deal with this issue, KernelCare provides vendors with kcarectl --uname command-line utility that shows the patched version of the kernel, representing the security level of the kernel up to the reported patched version. Additionally, KernelCare provides a report by running kcarectl --patch-info (and through API) that presents the CVEs that were patched in the currently running kernel by KernelCare.

What is Included with KernelCare Enterprise to Make Enterprise Vulnerability Management Flawless?

KernelCare Enterprise is made for powerhouse organizations with 1000 or more servers. Without automation tools, these organizations would suffer from costly overhead involved with manual patching and scanning. Monitoring servers for patch updates, testing, and performing the actual patching would be a full-time job for multi-team staff.

END_OF_DOCUMENT_TOKEN_TO_BE_REPLACED 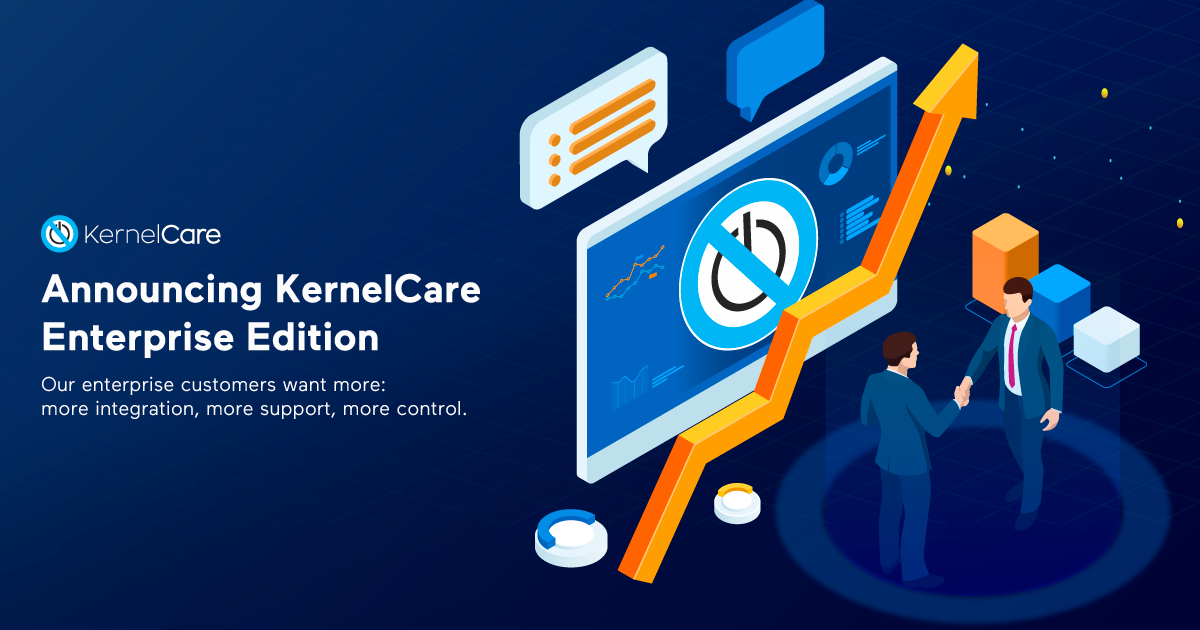